A former footballer’s wife who lost weight to feel more fit and active alongside her sporty husband has lost 3st 3lbs and has been named Slimming World’s Top Target Consultant after keeping the weight off for an amazing 36 years.

Kathryn Cooke, 63, had struggled with her weight since she was a child and initially joined Slimming World to lose weight for her wedding to footballer husband Joe, who was at that time playing for Bradford City.

After successfully slimming for her wedding, Kathryn regained some weight following the birth of her two eldest daughters Geraldine, 40, and Yvette, 37. She re-joined Slimming World after the birth of her second daughter, slimmed to her target weight and has stayed there ever since!

Kathryn, who now lives in Mirfield, West Yorkshire, says: “I’d always been overweight even as a child, so I knew that I needed help to feel great for my wedding. Slimming World was a fab way to lose weight because even back then the core values were the same – delicious food, lots of support and absolutely no guilt or shame. When I married Joe at my target weight in 1977, I knew I had made the right choice. I felt happy, confident and beautiful which is how every bride should feel.

“A couple of years later I became pregnant with Geraldine and sadly gained much of the weight back. I didn’t really have chance to lose the baby weight before I fell pregnant again with Yvette and by then I’d decided that I wanted to set a healthy and active example to my girls, so I re-joined Slimming World.” 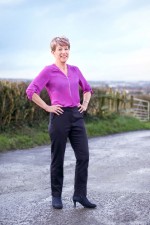 I now have four wonderful grandchildren to keep me busy and I love being a happy, active and healthy grandma to them.

She says: “I got to target by cooking deliciously filling meals like spaghetti bolognaise, casseroles and curries from scratch and enjoying all of the wonderful group support along the way from my fellow members. As a young mum I went on to become a Consultant myself and ran a Slimming World group in Heckmondwike for a short time.”

Kathryn says that she was motivated to lose weight to set a great example to her children, and she’d also started to feel uncomfortable in her own skin when watching Joe play football. She says: “As you can imagine a lot of the wives were very glamorous and when I used to take the girls along to watch Joe play I couldn’t help but feel a bit insecure. I knew I needed to make the changes for me and nobody else though, I had to be ready to make those changes for life. I wasn’t in it for a quick fix!

“Being married to a footballer can be quite lonely sometimes – we moved around quite a lot as Joe moved from Bradford City to Peterborough, Oxford and then on to Exeter. By the time he moved back to Bradford in 1982 I was ready to take a little time for me and focus on my own health and fitness.

“Joining Slimming World gave me the confidence to get more active and unearthed a passion for fitness that I honestly never thought I’d have! At school I was the kind of person to dread PE and would do anything to get out of exercising – yet as an adult I found that I was really enjoying a variety of exercise classes which eventually led me to become a fitness instructor myself. I still teach three classes a week and like to exercise three to four times a week, I just love it! It was at that point I realised I’d changed my whole lifestyle for the better.”

And even a surprise arrival wasn’t about to throw Kathryn off track. She says: “I unexpectedly fell pregnant with my third daughter at the age of 37 – yet this time I was so healthy and active that I didn’t gain lots of weight. In fact, I was back at my target weight within six weeks of Gabrielle’s arrival without any added pressure or restrictive eating – I just continued my healthy habits as usual. By that point it was just a way of life and I knew no different! I now have four wonderful grandchildren to keep me busy and I love being a happy, active and healthy grandma to them. If anything, they struggle to keep up with me! I can honestly say I feel better now in my 60s than I did when I was in my 20s.”

Losing weight sparked another passion for Kathryn – helping others to achieve their own weight-loss dreams. She says: “I’d had a brief spell as a Consultant back in the 80s, and I still wanted to have a go at running my own Slimming World group. I’d done so much during my years at target that I was keen to help other people to achieve their dreams.

“I’ve now been a Consultant for eight years and it really fills me with pride to know I’ve helped so many people. I’ve seen people conceive as a result of losing weight, reduce their diabetes medication and blossom into the confident happy people they were always meant to be. Weight maintenance is a difficult thing to master, and it’s something I couldn’t have achieved without the support of my Consultant and my own Slimming World group. To know that I’m helping other people to do the same really is the best feeling in the world.”

Group: Kathryn attended the Wyke Slimming World group in Bradford run by Jean Smith and runs her own groups in Roberttown and Liversedge in West Yorkshire.

Breakfast: A bowl of cereal with full-fat milk, followed by toast and butter

Snack: A milky coffee and 2 biscuits

Lunch: An egg mayonnaise sandwich, with a biscuit

Dinner: Stew and dumplings, followed by sponge pudding and custard

Breakfast: A large bowl of fresh fruit such as mango, strawberries, nectarine and blueberries, with fat-free natural Greek yogurt

In addition, you can view a video of Kathryn talking about her weight loss here.

Slimming World was founded by Margaret Miles-Bramwell (OBE, FRSA) in 1969 and is now celebrating its 50th anniversary. There are now more than 19,000 weekly groups supporting 900,000 members across the UK and Republic of Ireland. Groups are run by a network of 5,500 community-based Slimming World Consultants, who receive specific training in the role of diet and physical activity in weight management, as well as sophisticated behaviour-change techniques. Slimming World’s healthy eating plan, Food Optimising, is based on the science of satiety and energy density. Our phased activity programme, Body Magic, eases members into activity until it becomes an intrinsic part of their daily routine. The principles behind Slimming World’s philosophy are based on a deep understanding of the challenges faced by overweight people and recognition that those who struggle with weight carry a double burden, the weight itself and a burden of guilt and shame about their weight. Slimming World’s programme integrates practical, up-to-date advice with a highly developed support system based on care and compassion, and Consultant training focuses on facilitating, encouraging and empowering members to make changes in a supportive, warm and friendly group environment. Consultant training is delivered through the Slimming World Academy. Slimming World also invests in a comprehensive research programme to develop its support for long-term weight management. The group support provided by Slimming World is recognised as effective by the National Institute for Health and Care Excellence (NICE) and the NHS.