A mum who was once tormented by bullies who called her ‘Big Mac’ has won a national award after losing 4st and maintaining her healthy weight for 17 years.

Zoe Mole, 38, from Wimborne in Dorset, suffered physical and verbal abuse throughout her school days, before dropping five dress sizes in her early 20s and maintaining her weight loss ever since. She hasn’t looked back and even runs her own slimming group helping others to change their lives as she did.

Zoe’s weight problems began when her parents divorced when she was just nine-years-old and she turned to food for comfort. She says: “That’s when my unhealthy relationship with food started. I lived off sweets and cakes and would sneak spoonfuls of golden syrup. It made me feel good for a minute or so. My dad worked a lot too so I would cook for us, which meant mainly oven or ready meals.”

Unfortunately, Zoe’s size didn’t go unnoticed at school and she was picked on incessantly. She was regularly spat on and called ‘Big Mac’ because her maiden name was McGregor. Zoe says: “I had no friends and would often eat my lunch in the school toilets so that no one would see me eating.”

After leaving school things got worse as Zoe found herself in an unhealthy relationship, which ended after three years. She says: “I was at rock bottom. I hated myself. One day my sister found me sobbing on the stairs and said ‘Enough is enough. We’re joining Slimming World’.”

So in January 2002, weighing 13st 7lbs and wearing a size 18, Zoe walked through the doors of her first ever Slimming World group. She says: “It was one of the scariest things I’ve ever done – and also the best thing. The main thing that struck me was the acceptance I felt – I’d expected everyone to laugh or stare at me, but for the first time ever I found myself in a roomful of people who didn’t judge me and I was made to feel really welcome. As a Consultant myself now, I always remember that and I think having the strength and courage to walk into a group when you’re at your lowest is something to be very proud of.”

She began following Slimming World’s Food Optimising eating plan and swapped her diet of processed meals and sugary snacks for home-made cooking. She discovered a love of new foods, including pasta and fresh fruit. She says: “I don’t think I ever ate fruit and veg before. I loved – and still love – that I can eat pasta and the freedom of the plan which means I can eat without worry and don’t have to count and weigh everything I eat or feel hungry. It’s so liberating compared to counting calories or fat. After all these years I still love discovering new recipes each week in my group and love that, despite what a lot of people think, healthy eating doesn’t have to cost a fortune.”

Zoe hit her target weight of 9st 7lbs, losing 4st and wearing a size 8, in February 2004 and says it was an unbeatable feeling: “It was a dream come true. When I first joined Slimming World I worried it would just be something else I failed at, but week on week my group and my Consultant helped me to find my inner confidence and I did it! It’s not just about stepping on the scales and seeing that number though, it’s about gaining the life I wanted to live.”

After losing weight, Zoe had the confidence to start being more active, taking up running via the Couch to 5k app and is due to run the London Marathon in April 2022, and she tried online dating too. As a result, she met her husband Matt, they married in 2009 and now have two children, Daisy, nine, and six-year-old Max. 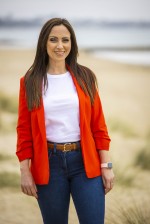 Week on week my group and my Consultant helped me to find my inner confidence.

Following the birth of her daughter in 2011, Zoe decided to leave her sales role and train as a Slimming World Consultant. She says: “I felt strongly that I wanted to help people change their lives like I’d changed mine. It really is the most incredibly rewarding role, seeing people step off the scales feeling great about themselves and their achievements each week – especially when you know exactly how brilliant that feels – is amazing, and you get loads of support, encouragement and training from Slimming World in the background too.”

Zoe says there have been times in the past 17 years where she has struggled to maintain her new healthy weight, including during recent lockdowns, and having the Slimming World plan and support of her group to fall back on has been invaluable. She says: “Lockdown and home schooling was something I – like everyone else – had never experienced before and I was surprised to see old habits, habits that I thought had gone forever, sneak back in. I quickly realised I needed to do something to regain control, so I joined a virtual Slimming World group because, even after all these years, I needed that support.

“I also find the tools Slimming World has really useful, especially For and Against lists, which helped me to delve into my mind, refocus and remind myself why I want to maintain my weight. When I look back at old photos of myself, even when I’m smiling I know I was miserable, and I don’t want to go back to that.”

Thankfully, with the support of her fellow slimmers, Zoe got back on track and is now delighted to be Slimming World’s Top Target Consultant 2021. She says: “It feels amazing. I’m so grateful to have found Slimming World aged 19, it changed my life and I believe saved my life as I really was at my lowest ebb. Now I’d love to inspire others to make a change too.”

Lunch: Pasta with a homemade tomato and vegetable sauce

Slimming World was founded by Margaret Miles-Bramwell (OBE, FRSA) in 1969. Members join local weekly groups or an online programme. Groups are run by a network of community-based Slimming World Consultants across the UK and Republic of Ireland. Consultants are trained in the role of diet and physical activity in weight management, as well as recognised behaviour-change techniques. Slimming World’s healthy eating plan, Food Optimising, is based on the science of energy density and satiety. Our phased activity programme, Body Magic, eases members into activity until it becomes an intrinsic part of their daily routine. Slimming World’s programme integrates practical, up-to-date advice with a highly-developed support system based on care and compassion, and Consultant training focuses on facilitating, encouraging and empowering members to make changes in a supportive, warm and friendly group environment. Consultant training is delivered through the Slimming World Academy. Slimming World also invests in a comprehensive research programme to develop its support for long-term weight management. The group support provided by Slimming World is recognised as effective by the National Institute for Health and Care Excellence (NICE) and the NHS.

Zoe Mole is named #SlimmingWorld Top Target Consultant 2021 after losing 4st and keeping it off for 17 years!